The Ballad of Syd & Morgan (Update 2)

With less than two weeks to go before the publication of my novel about Syd Barrett, E M Forster and the mysteries of creativity, Henry Layte and his Propolis team have done a wonderful job in setting up an anticipatory buzz about the book – although since they all work in a Hive, I might perhaps have expected that. Either way, I am deeply grateful.

I’m told reviews will be appearing in various eye-catching organs, though I won’t tempt fate by itemising which ones – I’ll believe them when I see them, and give links in subsequent posts (provided they don’t turn out to be hatchet jobs, or maybe even if they do). It seems fairly certain there will be a piece on the book and me in the Glasgow Herald, in all likelihood on Sunday 21 October. A couple of weeks ago the lavishly-experienced and wonderfully-engaged journalist Jackie McGlone came to talk to me and share my pleasure over all things Sydish and Morganesque. There is also going to be a chat with Robert Elms on Radio London on the morning of 31 October. All things being equal, I’ll post links to both in due course. (And I’ve just heard Cerys Matthews has talked about the book on 6 Music…)

One thing that has truly heartened me – as Henry lays the groundwork for fun-sounding launch events in Oxford, London, Norwich and Cambridge – is that members of Syd’s close family have been extremely positive about the book, and about the arguably unconventional way in which I have tried to portray their famous relative. Earlier this year I submitted the script to just one other publisher in addition to Henry Layte’s Propolis, and while the guy at the other firm liked the idea my story was based on, he declined in the first instance since, “I just kept thinking it was too unlikely and that poor old mentally struggling Syd wouldn’t have been quite like the character in the book… or have spoken like he does…”

This really interests me, especially after Henry sent a proof of the book to a man who actually knew Syd and his bandmates well during the 1960s – the musician and physician Hank Wangford. HW very kindly wrote back after reading it that, “It’s a great little vision of a meeting that could so easily have happened. It makes both Morgan and most importantly Syd into real people. Syd has consistently and one dimensionally been written off, depersonalised, as a simple acid casualty. Too many drugs. Brain rotted by the summers of love. But this humanises him, looks further into him and for this I’m grateful…

HW also suggested, “You should distribute it to all indie record shops – all Floyd fans should read this. In fact the Floyd should read it – send copies to Dave Gilmour, Nick Mason and Roger Waters” – which I have to say I personally would be all in favour of!

His reference to Floyd fans prompts a further reflection. I’m genuinely startled by how many people – of all ages and genders and from all walks of life – have spoken to me with such feeling about Morgan and Pink Floyd after hearing that I’ve written about them. Most particularly people have been keen to self-identify as ‘real Syd Barrett fans’; and if perhaps they can’t quite claim this for themselves, they invariably know someone else who could.

I knew that both men in their different ways had achieved the status of cultural titans, but I hadn’t quite registered that they were held in such very warm regard. I’m still not able to put my finger on why this should be. In the novel I touch on how both men to a degree came to ‘stand for’ particular eras: Edwardian times and the Idealistic Sixties. This doesn’t go any way to explain their strictly personal appeal, but could it be that as icons they prompt in many of us a nostalgic longing for periods when there seemed to be more hope around – in Morgan’s case before the outbreak of the Great War, in Syd’s before the Sixties Dream died a death? Not Golden Ages exactly (we all know those have never really existed) but eras when it seemed that we and the world could still be changed for the better?

Oh, and one other thing: last Thursday evening, at inexplicably short notice, a photographer was commissioned to show up at our home to take some pictures of me to be used alongside Jackie McGlone’s piece in the Herald. He was locally-based Dan Paton – I would thoroughly recommend taking a look at his website www.danpaton.net –  and he proved so committed to his work that he ended up staying for three hours. This meant my partner Decca and I had to shelve our original plans for that night, but we didn’t mind in the least as all three of us happily chewed the fat while Dan worked, for much of the time with Syd’s music setting the mood in the background.

The images Dan sent me next morning were extremely interesting – not least the one I reproduce here. He’d asked me to sit at our kitchen table beneath an old David Hockney print of Decca’s. He could have asked me to sit anywhere, but that was the spot Dan chose. The print shows a room piled high with straw – from the fairytale in which a girl is shut away by a king and told on pain of death to transform the stuff into gold.

That print used to be on the wall facing our bed and for years – my wilderness years as a novelist – it would kind of haunt me when I opened my eyes on it in the morning. I had always seen literary creativity as a kind of philosopher’s-stone business: you take your own personal experience of life as raw material, and then (at least in a best-case scenario) you transform it into something magically golden. But for too long Hockney’s image seemed to be encapsulating the predicament I had somehow got myself into: I had stacked up so much of my own life’s raw material that I could hardly move or breathe, and I was desperate to turn it into something (anything) that would take up less space – since gold transformed from straw must, I reasoned, be like boiled spinach, ie a whole roomful would distil down into just enough to make, say, a single discreet earring. But could I turn the trick? No I decidedly couldn’t!

Until at last, three years ago to be precise, I found myself replacing the monstrous stack of my own straw with raw material from two other people’s lives – Syd’s and Morgan’s – and I set about trying to transform that instead. I don’t know yet if I’ve ended up with anything like a golden earring. That will be for others to decide. But at least I’m not still asphyxiating in a room jampacked with my own straw, and now there is space to bring in some new raw matter in due course. Which feels like a sort of result. And here’s perhaps the oddest thing: although I based this new book on hard facts about the lives of Syd and Morgan, I’d still say it has more of me and my own cartloads of straw lurking inside it than any of my previous novels. Maybe that’s because it isn’t just about those two great men but also about creative endeavour in the broader sense, and how hard it can be to have and then lose the wherewithal to produce art. 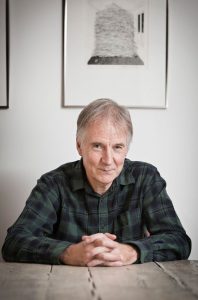 when I am listening to Syd and talking about Morgan.