The Ballad of Syd & Morgan (Update 1)

A  couple of months ago, while this website was under construction, I made myself a hostage to fortune by declaring on the ‘Recent & Ongoing Projects’ page that I would write blog posts about my next novel, The Ballad of Syd & Morgan, as the time for its publication approached. Now I have to deliver.

It’s quite tricky to find the right tone. This book means an awful lot to me, and I’d like it to connect with as many receptive readers as possible. I even think it’s just about the closest I’ve come to producing in print something properly joined-up. On the other hand, even seeming to be blowing my own trumpet in any way appals me. I do not tweet, neither am I on Facebook (well, I am in fact ‘on’ it, but only in the way that other people are ‘on edge’, or ‘on remand’ – it’s not a place where I’d voluntarily spend much time). So I’m not really in a position to use those platforms to big the project up. Which leaves this blog.

I’ve already posted the book’s cover image, which is great, but two dimensions tell only half its story. The entire finished artefact is an intriguing little wonder in its own right. I am indebted to Niki Medlik for dreaming it up and executing it. I am indebted to everyone who has anything at all to do with Propolis Books, my small independent Norwich-based publisher, and especially its head honcho, Henry Layte – a man I intend to write about at greater length separately. Suffice to say here that he has made my year, my decade, my millennium, by taking a punt on this odd little story of mine, and putting his heart and soul behind the whole project. His personal investment is huge.

Publication date is now six weeks away, yet already Henry has been spreading the word for quite some time. This seems to be paying off on the media front, where, among other heartening responses, the Observer recently flagged up the novel in the Books section of its autumn cultural preview, viz:

Nearer to publication day I’ll mention further print and radio coverage that is currently in the pipeline. This is my first novel for adults since Grimm’s Last Fairytale in 1999, and a lot has changed in these two decades, both in my own life and in the world of publishing. (By a nice twist, the person who alerted me to the mention in the Observer was Andrew Wille, a one-time editor at Little, Brown who took on that last novel and helped me so much to shape it.) I’m fully aware that readers in 2018 have many more potential distractions to cope with than they did in 1999. And of course ‘the death of the novel’ has continued to be widely heralded, just as it has for all of my own adult life.

In this era of short attention spans, it’s been good to be able to tell people in one short sentence what this novel is about: ‘Syd Barrett meets E M Forster’. There’s at least a fighting chance that one of the principals will sound familiar, then the rest can be filled in from there. It doesn’t seem to hurt nowadays, either, that these principals are ‘actual, historical people’. I’m not sure that twenty years ago such a premise for fiction would have been so admissible.

I do hope to get the opportunity, once the book is out, to discuss both these great artists and their work with people who might share my enthusiasm, even devotion. Again, I’m fully aware of the fact that many potential readers will know a hell of lot more about either man than I ever will. I can only trust they’ll acknowledge the spirit in which the novel is written, and that it is ‘about’ quite a few other things as well as the lives and works of EMF and RKB (Roger Keith Barrett – ‘Syd’ was a name he assumed during his young teens).

In small part, as ever, it is ‘about’ me and my own personal and professional up and downs, though you would need to know me pretty well to see quite how.

At this stage, I’d just like to share one small piece of personal information, the possible relevance of which struck me only this quiet autumn Saturday afternoon. I guess we all have snapshot moments from our past – little vignettes which to some extent encapsulate or epitomise phases of our lives. I have a number, but one has hung in there with notable tenacity – notable if only on account of the episode’s apparent inconsequentiality. It dates back to an autumn Saturday afternoon in the late 1960s, during my own young teens, and it consists solely of me sitting on the floor in front of the electric fire of our living room in Reading, leafing through a book I have recently bought, a rather impressive and quite large hardbacked atlas of the world, while my mother sits in an armchair nearby, maybe having a cup of tea, maybe knitting or reading. As far as I’m aware, we don’t converse. And that’s it.

I don’t know if this moment seemed especially pregnant to me five decades ago (did it even happen? the memory is a strange old thing), but increasingly it has since. ‘Pregnant’ is pretty much the right word. Not much seemed to be going on – I was idly perusing rainfall graphs of Lagos, Libreville and Salisbury (Rhodesia), while beyond the French window the sun went down; doubtless I was anticipating the striking of 5 o’clock when the classified football results would be read out on the radio; I don’t remember my mum often taking the weight off her feet, but that afternoon she was.

In retrospect there was an unusual calmness in the room, but also – somehow – a sense of great possibility. I don’t believe this sense came from seeing in the atlas all those countries, the world over, I might one day travel to. (I’ve never been an intrepid traveller; we took this year’s summer break in Bath.) During every decade since that afternoon, I have looked back on that autumn Saturday afternoon as a kind of golden moment – not with any kind of longing for a world now gone, but rather as a kind of harbinger of something still to come, something that would be good, and satisfying. Fulfilling, dare I say?

Well, today I realised that I’ve only ever owned one world atlas – and because my parents seldom threw away anything from my childhood, I still have it. It’s the hardbacked ninth edition of The Library Atlas published by George Philip & Son. And inside its front cover is a ‘Reading School’ sticker, upon which my headmaster had written, above his own signature, Richard Valpy Prize for Scripture 1968 H.K. Middleton. I honestly have no idea now what the Richard Valpy Prize was. I may well have been the only pupil who went in for it, propelled no doubt by my Methodist dad who still sent me to church every Sunday morning (while not always attending himself). But the point is this:

The prize – a book token – would have been given to me in the summer of 1968, and I would have deliberated long and hard over what to spend it on. Then the sticker would have had to be affixed, and written on, and signed, which would probably take us through to the autumn of that same year. So this must have been when my vignette was set in time. (I can’t imagine I would have been leafing, wonderingly, through a book that I had already owned for a year or two. The year has to have been 1968, not 1969 or 1970.) And that moment in time – late on an autumn Saturday afternoon in 1968 – is when I chose (or was foreordained?) five decades later to set the sequence of events which take place in my novel The Ballad of Syd & Morgan.

I don’t know what to make of this, if anything. I offer it up only as grist to the mill of ‘What Lies Behind Creative Endeavour?’ I hope that my novel will be life-affirming to those who read it, but there is sadness too in what I’ve just written about. Ten autumns on from 1968, the headmaster who signed my atlas, Anthony Tilton Davis, took his own life while still at the helm of my old school. My mother who was sitting in that armchair is more happily still with us, but the vascular dementia which has impaired her memory means that she has little working recollection of our family life either before or after 1968.

And as I look up from my screen and pause for thought – and a way to wrap up this post – I find myself gazing at the poster on the wall opposite which was enclosed with the vinyl version of The Beatles’ White Album, a record released slightly later in autumn 1968 than the ‘events’ in my factional novel.

In particular I gaze at the oblong blue-toned portrait, in close-up, of a singing John Lennon: an artist Syd Barrett used as a benchmark during his own fleeting period in the public eye, and a man who by 1968 was already beginning to look to the 13-year-old me like the kind of secular god who might one day stand alongside Him to whom I sincerely offered my Methodist prayers.

Why do we write the books that we do? Not sure. Not sure… 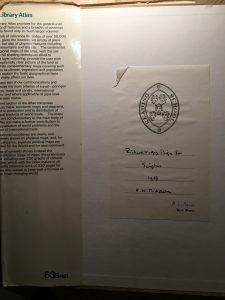