TLS Review of The Eleanor Crosses

I wrote on my ‘Recent & Ongoing Projects’ page about my partner Decca Warrington’s book on The Eleanor Crosses, which has been warmly received since its publication in June. This enthusiastic review by Emma J Wells from the Times Literary Supplement of 28 September is pretty representative. If you haven’t yet invested in a copy of this excellent work, I hope his encourages you to do so!

Today, Charing Cross is known as a London train station. Yet the “Cross” in question refers to an incredible tribute without parallel in Britain’s history. On a chilly November evening in 1290, the small Nottinghamshire village of Harby was thrown into disarray as Edward I’s beloved consort, Eleanor of Castile, perished of a “hot fever”. The grief-stricken King ordered her quickly embalmed, and her entrails to be buried at Lincoln Cathedral. Her body was then transported in sombre procession to Westminster Abbey. At each place where her cortège stopped on its twelve-day progress, Edward commissioned the construction of a spire cross in the English Decorated style in her honour. Only three of the original twelve remain. At Charing, where the funeral procession allegedly rested before entering Westminster, the final and most elaborate Eleanor Cross is a highly imaginative nineteenth-century reconstruction – to commemorate the opening of the Charing Cross Hotel – enclosing eight figures of Eleanor with kneeling angels at her feet.

While arguably no king of England had a greater impact during the Middle Ages than Edward, of the real Eleanor, chief begetter of the Plantagenet “empire”, surprisingly little is known. Warrington takes on her very small plate of fact and serves up a full feast, filling in history’s faint outline, deploying every scrap of antiquarian and contemporary scholarship and providing a well-researched insight into Eleanor’s life, Edward’s heartfelt vision, and the different fates of each individual cross since erection. The telling is by necessity speculative, since so little primary source material exists – we still know next to nothing of Eleanor’s appearance, let alone her inner thoughts and feelings. At times, we can question the authenticity of Warrington’s narrative, as when she speculates, “Agitation grows as [the Queen] clutches Edward’s arm, begging for help”.

Still, those in search of psychological insight will not be disappointed, with Edward presented with “grief as nothing compared to the thought of her suffering”, and Eleanor, “unable to look into her heart without regretting some of her actions”. Warrington perseveres to smooth the exaggerations into plausibility and history re-emerges from the myth.

While the crosses may have lost their gilding, or been toppled in the intervening seven centuries, Edward’s tender tribute still echoes: “whom living I have dearly cherished and whom dead I shall not cease to love”. The Eleanor Crosses is a story not only of stone memorials but of hard politics, pageantry and romance of an 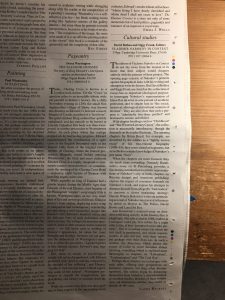